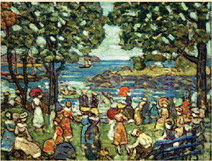 Maurice Prendergast (1858-1924) and his jubilant style seduced me at the Barnes Museum in 1999. A snobby Francophile, I was ill-prepared to lose my heart to an American Post-Impressionist artist in that quirky bastion of French Impressionist masters. But lose it I did. For the last 14 years, I have wondered why Prendergast was not more widely exhibited. Bowdoin College Museum of Art’s stunning “Maurice Prendergast: By the Sea,” on exhibit until October 13, 2013, makes up for lost time.

Prendergast was born in St. John’s, Newfoundland, to a shopkeeper who moved the family to Boston in 1868. He studied painting in Paris and spent summers in France honing his skills and establishing his lifelong artistic niche of representing seascapes and the crowds that flocked to them.

He returned to Boston in 1894 where he worked as a commercial artist. He spent many hours at Boston’s piers, chronicling the men, women and children who idled by the water.

By 1900 he had his first solo show in New York. He was continuously lauded and exhibited until his death in 1924. A lifelong bachelor, his frail health left him deaf at an early age. His brother Charles, a gifted craftsman whose frames house many of the works on display, was his constant companion and supporter.

The enchanting show (and its equally wonderful catalog) gathers, for the first time, a retrospective of Prendergast’s seaside imageries of New England, Italy and France. The 88 oils, watercolors, pastels, sketches and monotypes celebrate the artist’s decades-long love affair with all things “seaside.” These are not just pictures of pretty scenery. Each is alive with crowds of happy people enjoying the sea. The thickly applied vibrant color of his oils, and masterful fluid transparencies of his watercolors, establish Prendergast as an imaginative authority of his craft.

Strolling from room to room, one is aware of the influences of Sargent, Cezanne, Renoir and Bonnard. And yet, with that awareness comes an appreciation for this artist’s unique and innovative contribution to the evolution of the genre. His oil paintings vibrate with sumptuous color. His playful watercolors emit a peacefulness and deep admiration for both landscape and those enjoying it. The obvious joy his animated well-dressed subjects take in their surroundings is contagious. Adding to this exhilarating mix is the unexpected surprise of recognizing our own backyard in many of the paintings’ titles (Marblehead, Nahant, Revere Beach, Salem). The oil, “Marblehead Harbor,” on loan from the Barnes Foundation, is a particular thrill.

I dare you to go to this delightful show and not fall in love. In fact, I double dare you.