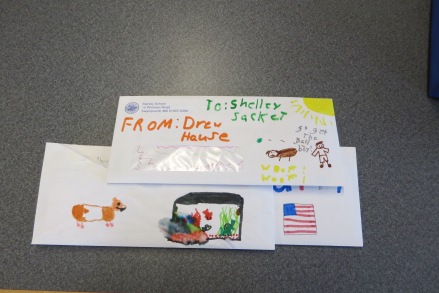 by Shelley A. Sackett

Stanley Elementary School fourth grader Drew Hause couldn’t wait to go to school last Wednesday, June 7. Since October, he and 21 other students in Mrs. Sami Lawler’s class have corresponded with pen pals from the Swampscott Senior Center and today was the day they would finally meet them face-to-face.

The seniors were just as excited. For many who live far away from their own grandchildren, gaining a peek through the keyhole of a nine-year-old’s life over the course of the school year was a welcome treat during the long slog of the New England winter. Meeting them in person would be icing on the cake.

The intergenerational program was started years ago by Marilyn Cassidy as a way to connect seniors and young school children. For the first few years it was at Hadley Elementary School, then Clarke Elementary School, and this year its home base was Stanley.

Pen pals Drew Hause and Shelley Sackett get ready to try their luck at bingo.

“The kids loved writing. They poured their heart and soul into their letters and I learned things while I was proofreading with them that I would otherwise not have known,” Lawler said, adding, “It was pretty special.”

Norma Freedman, of Swampscott, chaired this year’s Senior Center pen pal program. She has had a pen pal for many years, and even wrote to one girl throughout the summer while she was away at camp.

“It’s a lot of fun and it’s good for the kids. They know there’s someone in the world besides their immediate family that cares for them,” she said.

The biggest challenge for her? “They draw a lot on the envelopes. I’m not an artist and I don’t draw, but I tried to, to keep it interesting for them too.”

Thomas Mello presented his pen pal, retired social worker Bill Foley, with a last letter in an envelope covered with colorful drawings of his pets, a guinea pig and an aquarium full of fish. Unsurprisingly, his favorite part of the pen pal project was “drawing on the cards.”

From left: Thomas Mello, Bill Foley and Caleb Jaeger-Kerr get to know each other over lunch.

After lunch, seniors and fourth graders played four rounds of bingo, bonding even more over lessons in frustration and good sportsmanship. Freedman reminisced how her pen pal won one game last year and hugged and kissed her. “He was so happy. It was like I gave him the world,” she said with a smile.

Holly Mello, Thomas’s mother and one of the class chaperones, touted the scholastic benefits of teaching kids to communicate the old fashioned way — through letters. “It’s a great way for the kids to have an applied experience to practice their writing during the school year. They have grandparents, but they see and talk to them often on the phone,” she said.

Even though he didn’t win at bingo, Drew Hause had a big smile on his face as he hugged his pen pal goodbye and enthusiastically invited her to continue the correspondence after school lets out for the summer.

He offered parting words of advice to incoming Stanley fourth grade students. “When you guys are in Mrs. Lawler’s class, and she asks if you want a pen pal, you should say yes. You’ll be so happy because then you’ll meet them and it will be so much fun!”