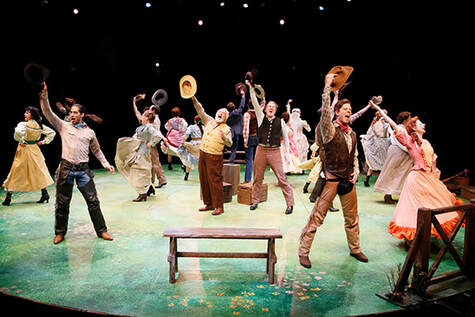 By Shelley A. Sackett

Just when the cold, wet slog of spring 2019 was about to wear down all hope that summer would ever arrive, NSMT comes to the rescue with a first-rate production of the 1943 classic, Richard Rodgers and Oscar Hammerstein II’s ‘Oklahoma!’ Perfect for theatre-in-the-round staging, this Broadway masterpiece has everything: a snappy, foot-stomping score, impressive choreography and a captivating story that is more complex and bleak than many may remember.

Under the direction of Mark Hartman, the orchestra is spot on. The opening overture is an immediate reminder of all the hits that came out of this show (‘Oh, What a Beautiful Mornin,” ‘The Surrey with the Fringe on Top,’ ‘I Cain’t Say No,’ ‘People Will Say We’re in Love,’ and, of course,‘Oklahoma!’) and last Wednesday night, the near capacity audience lip synched to almost every song. But when cowboy Curly McLaine (played with a perfect mixture of cockiness and aw-shucks-ma’am by the talented Blake Price) entered the stage astride an actual horse, the crowd predictably went wild with appreciation.

Born into a prosperous German Jewish family in Queens, New York City, composer Rodgers was the son of Mamie and Dr. William Rodgers, a prominent physician who had changed the family name from Rogazinsky. Librettist/lyricist Hammerstein II was also born in New York City.  His father was from a Jewish family, and his mother was the daughter of Scottish and English parents.

“Oklahoma” was their first collaboration and the first of a new genre, the musical play, which they created by melding Rodgers’ sophisticated style of musical comedy with Hammerstein’s innovations in operetta.

The narrative is simple on its face. Set in the Oklahoma territory in the 1900s, the musical lays out the story of two sets of lovers. Curley and the feisty, independent farmer Laurey Williams (played by the gifted Madison Claire Parks, whose dazzling singing is a delicious treat) are as in love as they are stubborn about not admitting their feelings to each other. They are early settlers building new lives on the wild frontier, and their pioneering spirits unsurprisingly clash.

Laurey’s Aunt Eller (played with zest by the buoyant Susan Cella) has some of the script’s best lines as she tries to knock some sense into Laurey and Curley, using every trick she knows short of actually knocking their heads together. The chemistry between the actors feels real, and their voices blend beautifully during their one duet, “People Will Say We’re in Love.”

Ado Annie Carnes (the Olive Oyl-like and spectacularly hilarious Melissa Carlile-Price), one of Laurey’s friends, and her boyfriend, cowboy Will Parker (Sean Bell, a terrific tap dancer) are the other couple. Or, at least they were. While Will was away on a trip to Kansas City, Ado Annie has fallen for the peddler Ali Hakim (the fine Cooper Grodin), who is a ladies’ man with zero intention of marrying her. Carlile-Price is a side-splitting enchantress, stealing every scene she is in.

But all is not innocence and trivial entertainment. Meatier topics like patriotism, impending statehood, and a spirited rivalry between the local farmers and cowboys provide a backdrop of danger and excitement. Add to the mix Jud Fry, the creepy farm hand that harbors nefarious designs on Laurey (darkly played by Alex Levin, whose baritone is operatic), and the plot truly thickens.

Mara Newbery Greer’s choreography elevates the show to greater artistic heights. In particular, the tap dancing in “Kansas City” and the dream sequence, “Ballet” (Bella Calafiura is a standout as Dream Laurey), are superb.

If there is any criticism of the production, it is that there is too much of it. At 3 hours, it is uncomfortably long, especially Act I (105 minutes).