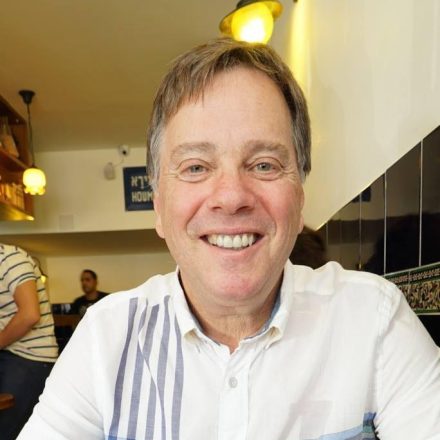 When Steve Rosenberg was seven years old, he had a friend who delivered newspapers for The Boston Globe. He tagged along, reading the paper before throwing it on the front doorstep. That early experience opened his eyes to the fact that there was a “whole, big world outside of my neighborhood that came in a newspaper every day,” Rosenberg said.

His fascination with journalism grew, reaching a peak during his teenage years with the Watergate political scandal and the crucial roles played by Carl Bernstein and Bob Woodward, two young Washington Post reporters whose determination and relentless hard work broke the story that toppled Nixon’s presidency.

“Watergate showed just how important the free press was to our country, and that with a little digging, a young reporter could help protect our democracy. I knew then that I wanted to be a journalist,” he said.

Rosenberg made that dream a reality, graduating from University of Massachusetts Amherst with a major in journalism in 1981. Thirty years later, after returning to school, he earned an MFA in writing and literature from Bennington College.

And as of its May 4, 2017 issue, he is the new publisher and editor of the Jewish Journal. “I’m excited. This is a dynamic and thoughtful community. And, in this time and age, committed journalism is needed more than ever,” Rosenberg said. “We give voice to a population and a demographic that otherwise might be ignored, and also serve as a watchdog of the government.”

Rosenberg will bring decades of experience to his role, including 15 years as a staff writer and columnist for The Boston Globe and three years as editor of The Jewish Advocate. His articles and columns have been broadly published in the US, and abroad in The International Herald Tribune, Ha’aretz Newspaper and The Jerusalem Post.

The Jewish Journal is a 40-year-old nonprofit based in Salem that reaches 17,000 homes semimonthly. Rosenberg is its fifth editor since 2014, and Bob Rose, president of the Journal Board of Overseers, thinks he is an excellent match. “Steve has a long and distinguished career as a journalist, has very deep personal roots in the North Shore and is intensely committed to Judaism,” he said.

Rosenberg intends to bring strong, quality journalism that reflects the greater Jewish community of the North Shore to the Jewish Journal. He plans to make the paper “newsier” with opinion and editorial pages “filled with experts who base their pieces entirely on facts.”

Lynn Nadeau, of Marblehead, has been a Jewish Journal board member for 12 years and is delighted with Rosenberg’s hire. “He is a real journalist, not an advocate. He chooses his words carefully, with nuance and thought. He will uphold the values we hold: accuracy, fairness, balance, inclusiveness, civility, transparency and integrity,” she said.

According to Rose, Rosenberg’s duties as publisher/editor include producing print and web versions of the Jewish Journal; supervising and leading the staff; interfacing with the Board; engaging with the Jewish community in the broadest sense; and inspiring philanthropy and development.

“Rosenberg is a good fit because he understands that the Jewish Journal serves a niche. Hopefully, he will fill the paper with local stories that were always the meat of the paper,” said Barbara Schneider, who was the Jewish Journal’s publisher from 2004 — 2015.

“As publisher/editor, he has a particularly challenging role,” she continued. “The publisher’s duty is to keep a nonprofit paper on a solid financial footing while being an outreach ambassador to the community. His role as editor is to fill the paper with interesting and frequently controversial stories. Sometimes these roles conflict.”

Rosenberg thinks of himself as a writer and storyteller above all, and he enjoys the interview process, especially its qualities of intimacy and inherent trust. He is continuously captivated by what he learns when he spends an hour sitting and listening to someone tell their story, and by the similarities he sometimes finds with his own life. “It’s rewarding to publish these pieces because they help serve as common threads, and remind us that we have much more in common with our neighbors than we thought,” he said.

Many of Rosenberg’s articles for the Boston Globe chronicled life in the Greater Boston suburbs, giving voice to commonplace people. Fishermen, gang members, suburban moms, rabbis and veterans are among the hundreds his columns brought to life. His most recent book, “Middle Class Heroes: Voices from the Boston Suburbs” is an anthology of almost 90 of these columns.

In his new role as publisher/editor, he intends to bring similar personal stories to the Journal, focusing on people who work tirelessly in the Jewish community, and on everyday relatives who help sustain their familes and Judaism. “These pieces provide a glimpse of our shared values and priorities,” he said. “We are documenting a time and place in American history.”

Mark Arnold, Journal publisher/editor from 3003-2006 and a longtime journalist, applauds Rosenberg’s commitment to reflect the diversity of the local Jewish community and to write about “real people doing real things.” “Steve will be honest about the challenges our institutions face and show where we are and aren’t making progress,” he said.

He added that Rosenberg has the qualities needed for the position: a clear vision of the role the Jewish Journal should play in the community; a set of values and goals to steer by; patience, diplomacy, creativity, and open mind, and — thick skin. “I think Steve has been waiting his whole life for a challenge like this,” Arnold said.

Rosenberg and his wife, Dr. Devorah Feinbloom, a chiropractor and director of Marblehead Natural Healing, have one son Aaron, currently enrolled in Clark University’s Masters in Business Administration program.

Rosenberg is passionate about Israel and Judaism, and he travels to Israel a couple of times a year, where he especially loves spending time in the desert. Closer to home, he also enjoys walking and relaxing in the woods and on the beaches near his home. He has played guitar since childhood and recently bought an electric drum set. He also studies the Torah and finds Rashi’s commentaries particularly intriguing.

Asked which of his many accomplishments — journalist, photographer, documentary filmmaker, author, editor, TV station manager, producer — he is proudest of, Rosenberg doesn’t hesitate. “My family is the most meaningful and really, the only lasting accomplishment in my life,” he said. He also mentioned a strong group of friends from kindergarten he is in regular contact with, and whom he loves.

“Relationships keep me going; all else is temporary,” he said.

One thought on “Rosenberg Takes the Jewish Journal Helm”