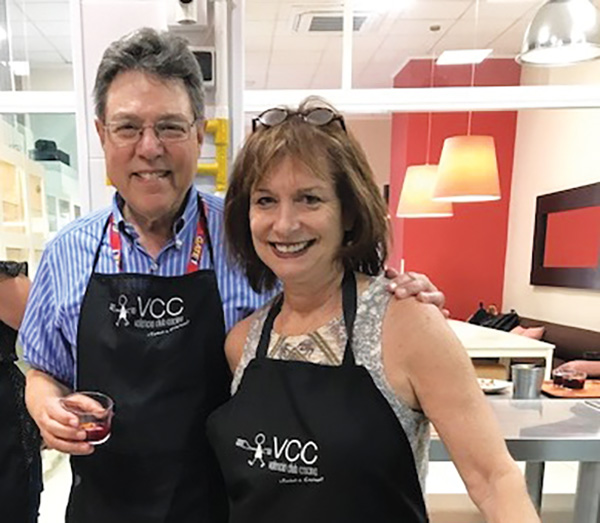 Eddie and Diane Knopf in Valencia, Spain in 2017, where they learned to cook paella, a dish that locals claim was invented in Valencia.

by Shelley A. Sackett

MARBLEHEAD – Every year since 1987, the Friends of the Hillel Library have recognized members of the community for their commitment to learning and the pursuit of knowledge by presenting them with The Edith Bloch Award. This year’s recipients, Swampscott residents Diane and Eddie Knopf, will be honored at “Food: The Ultimate Connector,” a celebratory event to be held on Sunday, May 19 at 6 p.m. at the Epstein Hillel School in Marblehead.

“All of us who have had the opportunity to work alongside Diane and Eddie Knopf have seen first hand that their dedication to the North Shore Jewish community literally knows no bounds,” chairs Maura and Paul Copeland said in a press release.

Edith Bloch was a founding member of the Friends of the Hillel Library and was renown as a consummate teacher and committed mentor.

The Knopfs have made an impact on their community in many areas. For 11 years, Diane was Director of Community Engagement at Epstein Hillel and has volunteered in a number of positions, including as president of the JCC of the North Shore and chair of the JCC’s Jewish Book Month Speaker series. Eddie served on the Temple Beth El-Temple Israel merger committee and on the executive board at Congregation Shirat Hayam, where he is a regular at morning minyan.

Both earned MBAs, Diane from Northeastern University and Eddie from Boston University, and met at a Christmas Eve party in 1987. “I had a broken ankle and was in a cast, and he had a horrible cold,” Diane recalled with a laugh.

They married the following Thanksgiving, and Diane moved from Brookline to Swampscott, where Eddie had been living since 1978. Their daughter Elyse graduated from (then) Cohen Hillel Academy in 2004 and went on to Washington University in St. Louis.

To the Knopfs, libraries and education are synonymous and have long been part of their lives as students and adults. Diane and her mother, a 2nd grade teacher, established the Miller/Knopf Resource Library at Simmons University, both their alma maters. “Libraries matter to us,” she said.

Cooking, entertaining and travel matter to them too, and choosing Joan Nathan as the evening’s speaker reflects that. The award-winning cookbook author, PBS television host and newspaper and magazine contributor has won the James Beard Award twice, co-founded New York’s Ninth Avenue Food Festival under then-Mayor Abraham Beame, and received an honorary doctorate from the Spertus Institute of Jewish Culture in Chicago.

Born in Providence, Rhode Island, she is the mother of three grown children and lives in Washington, D.C. and Martha’s Vineyard with her husband, Allan Gerson.

Nathan will speak about her culinary exploration of Jewish cooking from around the world and sign copies of her latest cookbook, “King Solomon’s Table,” after a light dinner reception featuring recipes from the book. The event is open to the community and is free of charge, although registration is necessary.

Diane readily admits Eddie is the cook in the family. “He first got involved watching his mom and aunt cook,” she said. His favorite dishes to cook are chili, chopped liver, and turkey and stuffing for a big crowd. Diane’s favorite dishes to eat are “all of the above” plus Eddie’s locally famous popovers.

They love entertaining and bringing people together for an evening of food and camaraderie and share the responsibilities seamlessly. Eddie handles the majority of cooking and cleaning up and Diane organizes, decorates and plans the menu, which often features ethnic foods. “I am a very experimental eater, perhaps because my mom instilled in me a love of traveling the world,” Diane explained.

The Knopfs are in awe of Nathan’s accomplishments and couldn’t be more thrilled that she is the featured speaker at their honorary celebration. They share her beliefs that food has the power to unite people, especially during challenging times. Born in Tiverton, R.I., Diane’s link is also personal. “Before all the current famous Israeli/Jewish chefs, there was Joan from Providence, the leading expert in Jewish cooking who embraced and promoted Jewish cooking in America,” she said with just a hint of her native Rhode Island accent.