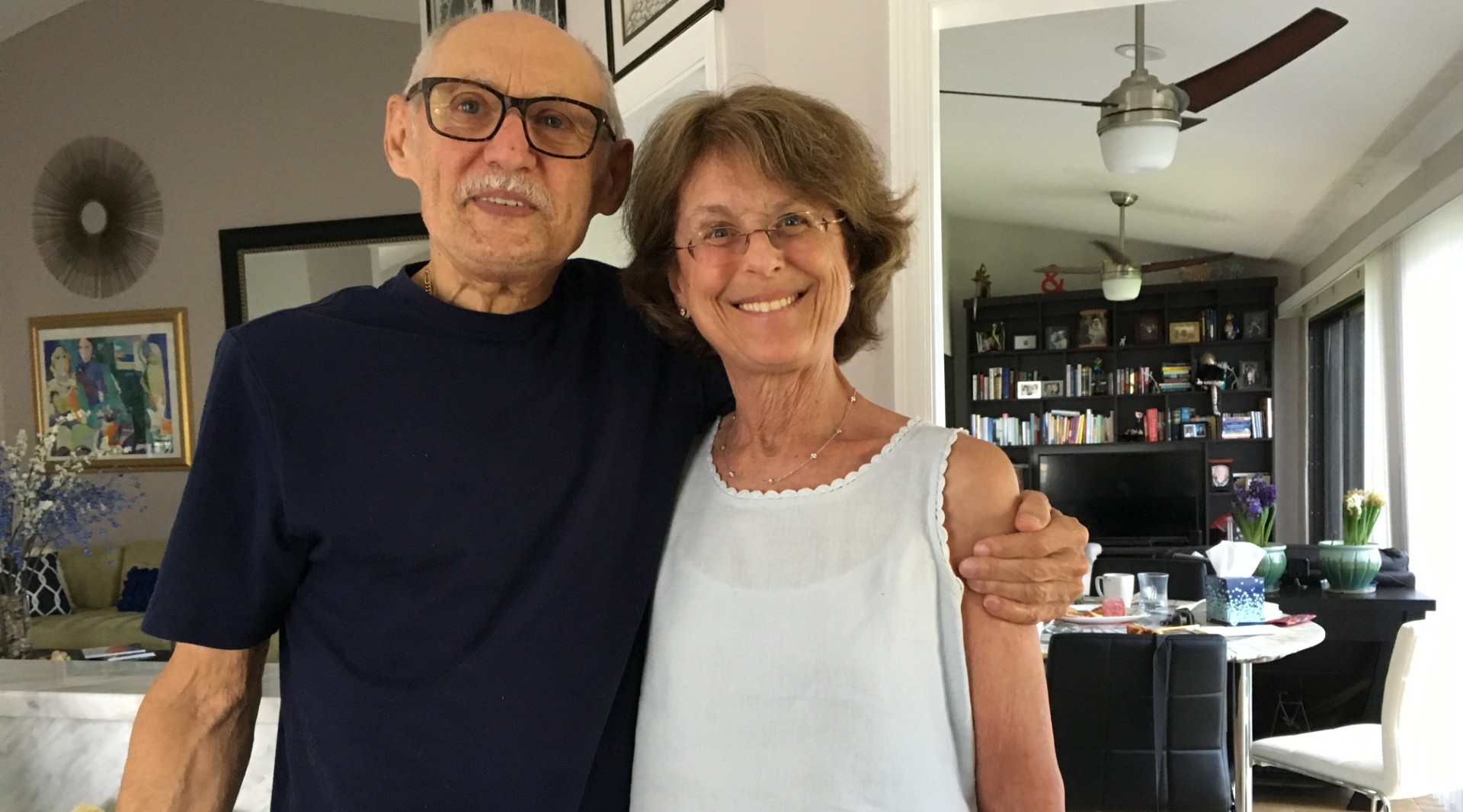 Emil and and the author, Shelley A. Sackett, shortly before Emil’s death in 2019 at the age of 82.

By Shelley A. Sackett

When Emil and Lili Berkovits moved to Boynton Beach, Florida, from Salem, Massachusetts, in 2014, they were excited to start their retirement after Emil’s long career as a cantor.

A fifth-generation hazzan who had emigrated from Czechoslovakia as a young child following World War II and grown up in Montreal, Berkovits spent most of his professional career in the United States.

He was a well-built, physically active man who played baseball professionally, but after an injury he gave it up for a career in musical and communal leadership. Berkovits helped bring generations of boys and girls to their bar and bat mitzvahs and made music that stirred the souls of many a congregant.

Decades later, after retiring to Florida, Berkovits, then 78, developed a persistent sore throat and noticed a lump on his neck. He soon was diagnosed with cancer of the oropharynx, near the back of his throat. Oropharyngeal cancer can be slow growing and, like many cancers, often spreads before any symptoms appear. By the time the cancer is detected it can be quite advanced.

The treatment was grueling. Over seven weeks, Berkovits received 35 radiation and seven chemotherapy treatments. He developed a heart infection and his throat became so inflamed that he couldn’t eat — both results of the radiation, doctors told him.

But the treatment was effective: For five years, well into his 80s, Berkovits lived cancer-free.

Yet he suffered dearly from the consequences of the treatment. He no longer could produce saliva, leaving his mouth permanently dry. He lost most of his ability to taste. He went on an exclusively liquid diet because regular food could cause him to choke. He lost 25 pounds, leaving him physically weak.

“Because he can’t eat normal food, he has no energy,” his wife, Lili, said earlier this year, shortly before Berkovits’ death over the summer. “Nothing can help these eating and swallowing issues.”

Berkovits’ experience was not unusual. Many cancer survivors find themselves struggling with health issues related to their treatment for years after they are declared cancer-free. Problems may include pain, fertility issues, infections, memory problems, sexual health issues, cognitive impairments and more, including increased risk of secondary cancers. For many, the health problems last a lifetime.

In Israel, a growing cadre of cancer researchers is focusing not just on cancer treatments but on improving life for cancer survivors by trying to mitigate treatment side effects.

“Quality of life is a subject of utmost importance as cancer patients go through therapy, and even once they complete their treatment,” said Dr. Mark Israel, national executive director of the Israel Cancer Research Fund, or ICRF. “It is not enough to cure cancer. We must also address the patients themselves and their experience.”

ICRF is now investing in research that aims to offset the debilitating side effects of cancer treatments that linger even after the disease is eradicated.

At the Rambam Health Care Campus in Haifa, its director of oncology, Dr. Irit Ben-Aharon, is studying how chemotherapy damages blood vessels, which can lead to vascular disease and fertility problems. By helping cancer patients avoid these toxic effects of their treatment, doctors can reduce their risk of developing cardiovascular disease or infertility in the future.

Ben-Aharon is hopeful her work will be of special benefit to younger cancer survivors.

“As the incidence of cancer in younger individuals is increasing, survivors with very long life expectancy are emerging as a group with significant challenges related to treatment,” she said.

Ben-Aharon’s work is one of four research projects currently funded by ICRF focused on improving the lives of cancer survivors. Two of the projects are being supported by grants provided through the Brause Family Initiative for Quality of Life at ICRF.

Since its founding in 1975, ICRF has raised more than $72 million for Israeli cancer research, including groundbreaking work that has led to both treatment breakthroughs and improved treatment outcomes.

While cancer treatments such as chemotherapy, radiation therapy to the brain and immunotherapy are crucial for curing cancer, they may leave the patient with cognitive deficits. Up to 75 percent of cancer survivors suffer cognitive impairments, including problems with attention, memory and learning.

Dr. Yafit Gilboa, an occupational therapist at The Hebrew University of Jerusalem’s Department of Medicine, is using her ICRF grant funded by the Brause Family Initiative to explore a novel approach to ameliorating that cognitive decline. This new approach, tele-rehabilitation, provides for the remote delivery of courses designed to diminish the cognitive effects of cancer therapy.

Gilboa’s strategy for treating patients with cancer-related cognitive impairment is comprised of 30-minute cognitive trainings several times a week using their home computer, supplemented by a weekly videoconference session with an occupational therapist.

Gilboa credits the Israel Cancer Research Fund for supporting not just research for cancer treatments, but also for treatment of side effects.

“This research makes a valuable difference in the quality of life for cancer survivors,” Gilboa said.

She and her team at The Hebrew University already have recruited patients from Hadassah Medical Center and completed a pilot study that showed encouraging results in cognitive and occupational performance. Patients also reported decreased depression and anxiety and an increased sense of well-being.

“One patient reported that since starting this therapy, he was striving to live the way he did before he got sick. Another said she felt more self-confident,” Gilboa reported.

Dr. Jacob Hanna of the Department of Molecular Genetics at the Weizmann Institute of Science in Rehovot is focused on pluripotent stem cells, which are like the cells from which babies are formed in that they have the ability to become any type of organ or tissue. Hanna and his team are studying how cells with the properties of embryonic stem cells can be generated from a patient’s skin or hair follicles and then used to create an array of cell types for transplantation into cancer patients. This could be instrumental in helping cancer survivors whose treatment regimen destroyed tissue or damaged organs.

Dr. Avi Priel of The Hebrew University’s School of Pharmacy is working on the problem of chronic pain among cancer survivors. While opioids are the most powerful tools for managing pain, they can have debilitating side effects and may be addictive for those requiring chronic relief.

“In the last two decades, the misuse of opioids — powerful but problematic drugs — has shed light on the need for new, less addictive painkillers with fewer side effects,” Priel said. “This is precisely my lab’s research goal.”

Priel’s research team, another recipient of a grant provided through the Brause Family Initiative, is working to develop novel analgesics — painkillers — that will have a potency similar to opioids but with minimal side effects. The team is also investigating drugs that can be combined with opioids to reduce the frequency and amount of opioid required to achieve good pain control.

“We believe these will enable patients who suffer from cancer pain to enjoy a better quality of life,” Priel said.

This article was sponsored by and produced in partnership with the Israel Cancer Research Fund, whose ongoing support of these and other Israeli scientists’ work goes a long way toward ensuring that their efforts will have important and lasting impact in the global fight against cancer. This article was produced by JTA’s native content team.