View from the Agra Fort with the Taj Mahal barely visible through the smog.

When I went to India, I was braced for the traffic, the garbage, and the almost unbearable density of humanity. I accepted that cows had a divine right of way over everyone everywhere, including Mack trucks on highways. I knew I would brush my teeth with bottled water and forgo my dietary staple, lettuce, for three weeks.

I thought I had done my homework.

Preparation for encountering Stars of David on Muslim mosques was not even remotely on my radar screen.

While I easily coped with the unrelenting assault on all my senses that is the joy and intensity of traveling in India, I was much less graceful at weathering the perceived assault on the icon of my Jewish identity.

On my first day in Delhi, at the first site we visited, I spotted the familiar six-pointed star in an unfamiliar place: at the Muslim Tomb of Humayun, burial spot of the second Mughal emperor. Jewish stars inexplicably adorned entryways, ironwork windows, inlaid floors, and painted ceilings. Was this some kind of a jet-lag joke?

At right: Entrance to Humayun’s Tomb in Old Delhi.

Our guide told us that Humayun’s Tomb was the first Mughal (a Muslim dynasty) tomb. Built in 1565 by the Persian architect Mirak Mirza Ghiya, it became the template for all future tombs, including the Taj Mahal. Had Ghiya deliberately blasphemed our sacred Hebraic symbol by splashing it all over his Mughal garden and tomb? Given our millenia of dogged persecution, this was hardly a far-fetched possibility. But here, in India, the cradle of yoga, compassion and meditation?

I vowed to get to the bottom of this.

What India lacks in traffic etiquette and control, it more than makes up for in Wi-Fi access, and I was no sooner through the hotel front door than my Google search yielded fruit. There were many explanations for why hexagrams adorn Humayun’s Tomb; not one pointed to bearing the Jews ill will.

Long before 1565, the hexagram was recognized as a potent symbol of planetary alignment in India. It signified perfection, good fortune, stability, calm and harmony. Akbar, Humayun’s son, wanted to pay homage to his father’s infatuation with astrology, and instructed Ghiya to incorporate the symbol in the tomb design.

Below: Palace of the Winds in Jaipur. 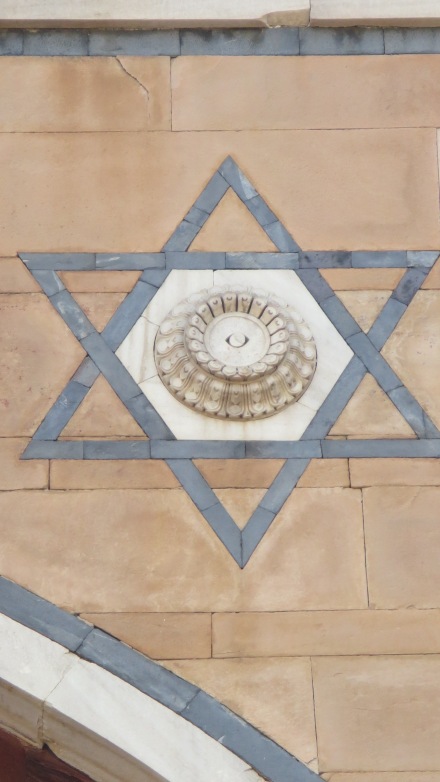 Akbar may have had additional, more practical and political, reasons. The Muslim Mughals ruled over vast areas of Hindu-majority India. Ancient Hindus revered the hexagram as divine representation of perfect union. Akbar may have cleverly bought his Muslim dynasty some popularity and legitimacy among the Hindus he ruled by prominently including their religious symbol on his first public work.

Whether or not I bought any of these explanations, there was no way to conclude that the Muslim hexagram was intended to insult us Jews or steal what was rightfully ours.

But was it really rightfully “ours?” Who had prior use claim over this six-pointed star?

As with all questions grounded in anything Judaic, there were scores of explanations. All agreed on one fact: that the symbol’s identification with the Jewish community dated no earlier than to the 17th century in Vienna, when the Jewish quarter was formally distinguished from the rest of the city. Akbar’s 1565 public use would seem to trump.

However, that had suddenly become less the point, and therein lay the real lesson. I had been searching for evidence that, once again, we Jews had been dissed and ripped off. Instead, I uncovered proof of my own knee-jerk pride and prejudice. India had given me the opportunity to appreciate the possibility of amicable common ground unrooted in anything negative, and I had nearly missed it. I was so focused on what I was looking for that I almost didn’t see what I had found.

I had booked a tour of India because I wanted to experience the sights, smells, sounds, and tastes the glossy brochure promised. The softening of a hard edge and recalibration of an inner lens was an add-on bonus.

I’d say I got way more than I paid for.

All photos by Shelley A. Sackett