By Shelley A. Sackett, Journal correspondent

The sixth annual North Shore Pride Parade and Festival will wind its way through Salem on Saturday, June 24, and for the first time, there will be an official Jewish North Shore group participating.

Even though the parade takes place on Shabbat, the Jewish day of rest on which observant Jews refrain from various forms of labor, 30 people have committed to marching under a banner that identifies the group as “Jew(ish) Tribe for Pride” and includes the logos of its sponsors, InterfaithFamily and Cohen Hillel Academy. 40 more have expressed interest.

It all started at last year’s parade, in which Laura Shulman Brochstein, Rabbi Jillian Cameron and Liz Polay-Wettengel marched with their families. They were chatting on Salem Common, where the parade ends, lamenting the lack visibility from the Jewish community, despite what they knew to be a welcoming Jewish community for LGBT individuals and families.

They figured the likely reason was that the event took place on Shabbat. 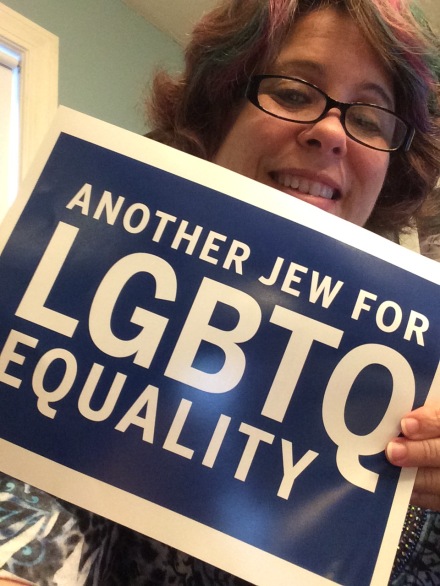 “Because of our collective professional experience working for Jewish organizations over the years, we knew that for many, this was the barrier for participation,” said Polay-Wettengel, who lives in Salem and is National Director of Marketing and Communications at InterfaithFamily.

Brochstein is a social worker from Marblehead and the North Shore Outreach Manager for Jewish Family and Children’s Service; Rabbi Jillian Cameron, of Salem, is the director of InterfaithFamily/Boston.

“We thought, ‘What if we marched as individuals and not as an organization?’” Polay-Wettengel continued. Over lunch one day, the three decided that, as Jews in the North Shore community, they wanted their LGBTQ friends to know that the Jewish community supported them.

The three women organized an independent Jewish group, called Jew(ish) Tribe for Pride, creating an opportunity for North Shore Jews to march together, regardless of institutional or rabbinical support or opinions.

As a Jew, a rabbi and a member of the LGBT community, Rabbi Cameron can’t think of a better way to spend Shabbat on June 24 than marching with her North Shore community. “For me, this is a sacred act, an act of prayer, a way to seek out greater connection with my fellow human beings and with God,” she said.

Although Beverly’s Temple B’nai Abraham members will participate in the Pride Parade for the third consecutive year, they march with the Beverly Multi-faith Coalition. After their Shabbat morning services in the TBA chapel have ended, “We will pray with our feet (as Rabbi Abraham Joshua Heschel described his experience marching for civil rights),” said TBA’s Rabbi Alison Adler.

“ I don’t see walking in a parade in support of equality and inclusion as a violation of Shabbat – just the opposite,” she said. “Shabbat is supposed to give us a taste of the kind of world we want our children and grandchildren to inherit, a world of equality, free of hatred. I am thrilled that there will be more of a Jewish presence this year under the Tribe for Pride banner.”

Rabbi Adler was instrumental in getting the North Shore Pride Board to change the night of the interfaith service preceding the march from Friday to Thursday. As a result, most North Shore rabbis and cantors will attend this year, leading a song together as part of the service.

Rabbi Michael Ragozin, of Conservative Congregation Shirat Hayam in Swampscott, applauds Rabbi Adler’s success and will attend and publicize the Thursday night event. However, he cannot do the same for Saturday’s parade.

“Shabbat and support for the LGBTQ community are two values that I hold dearly. Unfortunately, the North Shore Pride parade conflicts with Shabbat, and I will not publicize events that conflict with Shabbat,” he explained.

Rabbi David Meyer of Marblehead’s Reform Temple Emanu-el supports any of his congregants who wish to attend and participate in the parade, although he thinks it would be in poor judgment to have the Temple play an official role in a secular event that takes place on Shabbat.

“Although certainly not a traditional approach to Shabbat observance, sharing in the work of increasing civil rights, justice and peace in our community, nation and world is very much in keeping with Reform Jewish principles,” he said.

Rabbi Cameron welcomes everyone to march under the new Jew(ish) Tribe for Pride banner. “In life, there aren’t many parades, aren’t that many times we get the opportunity to show up and physically express the things which are important, which makes us who we are,” she said.