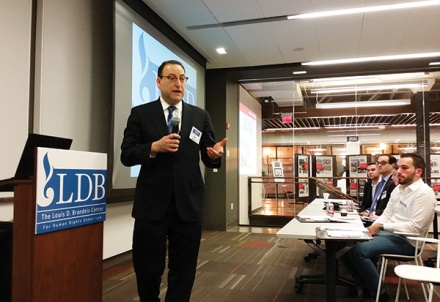 OCTOBER 19, 2017 – SWAMPSCOTT – Rabbi Michael Ragozin was particularly fired up during his 2016 Kol Nidre sermon at Congregation Shirat Hayam. The topic was anti-Semitism on college campuses, an issue he said “Gets me in the kishkes. It was in college that my Jewish identity solidified and set me on my trajectory. I don’t know that I would have grown in the same way if I had been under attack simply for being Jewish.”

That sermon generated interest and launched the Campus Anti-Semitism Task Force of the North Shore. Its mission is to promote awareness of campus anti-Semitism; to educate teens on how to deal with situations they may encounter; and to empower students to advocate for themselves and others.

Task force participants include members of Shirat Hayam in Swampscott, Temple Emanu-El in Marblehead, unaffiliated families, and Marty Schneer, executive director of the Jewish Community Center of the North Shore.

“The issue of campus anti-Semitism is not the sole dominion of a single individual or shul,” Rabbi Ragozin said. “We must all work together to put an end to the hate, lies, disinformation, and intimidation on college campuses.”

On Sunday, Oct. 29, the task force will sponsor its fall event, “What’s Up at College,” a panel discussion about Jewish life on campus geared to parents and teens. The panel includes current college students, professionals and alumni. It will take place from 5:30 to 7 p.m. at Congregation Shirat Hayam, 55 Atlantic Ave., in Swampscott. Rabbi Ragozin will moderate.

“I hope teens and their parents will leave feeling empowered,” said Arinne Braverman, one of the panelists and the former executive director of Northeastern University Hillel. She will provide information about how the State Department defines an anti-Semitic act and will address the active role students and their families can play by participating in community responses to campus incidents.

Two alumni of the Epstein Hillel School in Marblehead, Dylann Cooper, a senior at Roger Williams College, and Zach Shwartz, a graduate of Boston University, will be joined on the panel by Tufts University sophomores Madeline Blondy and Rachel Wulf.

Last April on the night before Passover, members of the Tufts Community Union Senate passed a divestment resolution that accused Israel of being an apartheid regime and endorsed the BDS (Boycott, Divestment, Sanctions) Movement.

Similar issues are arising widely and more frequently, according to Kenneth L. Marcus, president and general counsel of the Louis D. Brandeis Center for Human Rights Under Law in Washington, D.C., and author of “The Definition of Anti-Semitism” and “Jewish Identity and Civil Rights in America.”

Nationwide, there have been 457 incidents so far in 2017, including 27 in Massachusetts, according to the AMCHA Initiative, a California-based nonprofit that tracks anti-Semitic acts at institutions of higher learning (amchainitiative.org).

Nonetheless, Marcus is heartened that the Jewish community is becoming more aware of the problem and is ready to take action. “There are now increasing numbers of Jewish, pro-Israel, and counter anti-Semitism events at many colleges,” he said. “While it is true some problems are worsening, it is also true that we are getting stronger and better able to fight them.”

Jahna Gregory, a North Shore task force member and Marblehead mother of three, is pleased the group is fulfilling its mission of awareness, education, and advocacy. At its next event, the task force will invite Braverman to lead a one-day workshop of tools and strategies for dealing with campus anti-Semitism that she developed while at Northeastern.

“It is important that the Jewish community not isolate ourselves after anti-Semitic incidents and that we send an unambiguous message to our Jewish young adults that they should never allow themselves to be intimidated into silence or hiding their Judaism,” said Braverman.